This guy has to be the dumbest racist ever. He harasses his black neighbors then challenges everyone while being recorded. After the video goes viral dozens of people of show up at his house to set him straight. Then gets arrested. But why did it take a video for something to be done about his frequent racist tirades against his neighbor:

A New Jersey man who was caught on video shouting racist insults and harassing his neighbors was arrested twice and charged with several hate crimes, with his second arrest coming as people staged an hourslong protest outside his home.

The man, Edward Cagney Mathews, 45, has been the subject of numerous complaints from his neighbors in his Mount Laurel, N.J., condominium complex, who have accused him of racist harassment, a police spokesman said.

…In the video of the incident, Mr. Mathews turns directly to the camera and gives his exact address, challenging viewers to “come see me” and to “bring whoever.” So on Monday, more than 100 protesters showed up outside his door, videos posted on social media show, and called for him to come out.

END_OF_DOCUMENT_TOKEN_TO_BE_REPLACED

Not sure what they were thinking. But it didn’t end well:

Members of a white supremacist group marching through Philadelphia on Saturday evening “ran away” from city residents who confronted them, according to police.

Demonstrators, who police said were from out of town and were reportedly members of the Texas-based Patriots Front, chanted while holding American flags and shields as they made their way from Ben Franklin Parkway to Penn’s Landing, according to WPVI, an ABC affiliate.

Photos from the scene showed the group carrying a banner that said “Reclaim America.”

…”They started engaging with citizens of Philadelphia, who were none too happy about what they were saying. These males felt threatened, and at one point, somebody threw a smoke bomb to cover their retreat, and they literally ran away from the people of Philadelphia,” Philadelphia Police Officer Michael Crum told reporters.

END_OF_DOCUMENT_TOKEN_TO_BE_REPLACED

This sounds very credible. If they murdered a police officer and assaulted others, why wouldn’t they have done what they threatened publicly–to kill Mike Pence and Nancy Pelosi:

An FBI witness says that members of the far-right Proud Boys had hoped to assassinate Vice President Mike Pence and Speaker of the House Nancy Pelosi during last week’s violent storming of the U.S. Capitol.

An FBI special agent made the claim in an affidavit as part of a criminal complaint against 43-year-old Dominic Pezzola, who is accused of taking part in the riot in support of President Donald Trump’s false claims that the presidential election was “stolen.” Pezzola, who is also known as “Spaz,” allegedly used a shield taken from a Capitol Police officer to smash a Capitol window before entering the building. An FBI witness said that the group Pezzola was with had discussed committing violent acts that went far beyond property damage.

“[The witness] stated that other members of the group talked about things that they had done during the day, and they said that anyone they got their hands on they would have killed, including Nancy Pelosi,” the affidavit, which was filed Wednesday, reads. “[The witness] further stated that members of this group, which included ‘Spaz,’ said that they would have killed [Vice President] Mike Pence if given the chance.”

At core of those who stormed the Capitol building were anti-police neo-NAZIs and white supremacists. They meant to overthrow our constitutional republic. They deserve to die in jail:

A D.C. POLICE OFFICER assaulted by supporters of President Donald Trump as they stormed the U.S. Capitol last week barely prevented the attackers from taking his gun and using it against him, the Metropolitan Police Department chief said Monday, adding that they did succeed in stealing other parts of his department-issued gear.

Photographs from the demonstration, taken by freelance photojournalist Raquel Natalicchio, showed the moments Nibo was attacked by the mob.

“It’s a shame that I can’t walk down my street anymore,” Nibo said.

She said she was walking near the demonstration when she said the pro-Trump demonstrators began harassing her.

“I’m walking by and they’re yelling at me because of my color, calling me the N-word calling me the B-word, saying, ‘All lives matter, Black lives doesn’t matter,’” she said.

She said she yelled back and the crowd began following her, and then it turned violent.

“He goes and smacks me in the face,” Nibo said of one of the demonstrators. “And then all of them start trying to jump me, and then people jump in.”

“When they started pushing her around, this other woman that was a Trump supporter came up to her and ripped her wig off.” Natalicchio said. “Obviously, at that point, she began to try to defend herself.”

Natalicchio said she had to speak out about what she witnessed Wednesday afternoon.

Nibo said strangers came to her rescue, including a man with a red beard who was seen holding her in a number of the photos.

“He was whispering in my ear going ‘You’re OK, I got you, I’ve got you, don’t do anything. These people are literally trying to kill you,’” Nibo said.

As she said the man attempted to get her safely away from the crowd, she was pepper sprayed in the face and hit. She credits the man for saving her life.

“If not for him stepping in at that moment, these people would have literally tried to kill me,” she said.

These people are worse than we thought:

The far-right group the Proud Boys was dragged to court Monday by a church in the nation’s capital that claims it was terrorized last month when members of the group vandalized Black Lives Matter signs in an attempt to silence supporters of racial justice.

“The conduct of the Proud Boys in Washington, D.C. on December 12, 2020 amounted to a new and dangerous chapter in the long and terrible history of white supremacist mob violence targeting Black houses of worship,” according to the 34-page complaint brought by the Metropolitan African Methodist Episcopal Church in District of Columbia Superior Court.

The Proud Boys is tied to white nationalism and has been designated a hate group by the Southern Poverty Law Center. The Anti-Defamation League describes the group as “an extremist gang that has engaged in multiple acts of brutal violence and intimidation,” the lawsuit states.

They even attacked the police: 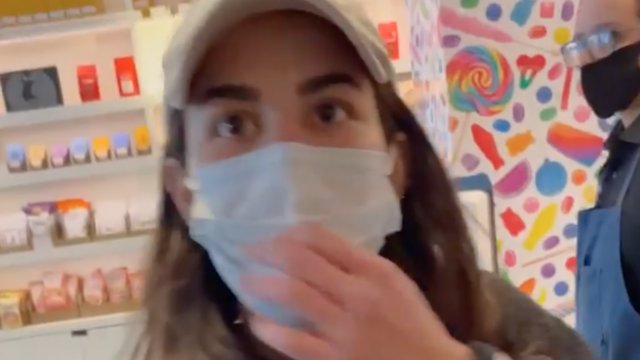 The beat goes on. Another Karen who automatically assumes that a black person is guilty of a crime without evidence. And with no regard for whether she could be endangering the youth involved. She actually physically assaults the true victim. Typical racist hate from a MAGA:

An acclaimed jazz musician said his 14-year-old son was accosted and falsely accused of stealing a woman’s iPhone at a boutique hotel in New York City over the weekend. The incident prompted an apology from the hotel and calls from the family’s lawyer to bring charges against the woman.

Keyon Harrold, a well-known trumpeter who has performed with the likes of Beyoncé, claimed he and his teenage son, who are both Black, were assaulted by the woman who claimed the child took her smartphone. He shared a video on social media showing part of their encounter with her inside the lobby of the Arlo hotel in Manhattan Saturday.

Here’s the video from Keyon Harrold:

There is no question who incited the violence:

A Black policewoman was injured and at least four people stabbed when a day of demonstrations in support of President Donald Trump’s election delusions ended in violence Saturday night in Washington D.C. Many have linked the violence to the white nationalist group the Proud Boys who Trump told to “stand back and stand by” during the presidential debate Sept. 29, 2020. Apparently, no longer standing by, they are shown in multiple videos attacking counterprotesters, burning a Black Lives Matter banner, and generally ignoring police orders with much-delayed punishment from authorities. In a video the New York Post obtained, white men in “America Strong” hats and wearing painted gold laurel wreaths associated with the Proud Boys attacked a man in all black, telling him to leave and shoving him when he tried.

“Get out! Get the f— outta here!” they shouted outside of Harry’s Bar, a gathering spot for the Proud Boys The Washington Post reported. When shoved, the man took out a knife to protect himself and tried to run away, the New York Post reported. “Get his ass!” someone in the crowd shouted. Police response as the targetted man vanished into the crowd was: “Stop guys stop — please stop.”

A 35-year-old white North Carolina man was sentenced on Monday to federal prison for violating the Fair Housing Act when he terrorized a Black family in 2014.

Douglas Matthew Gurkins of Greenville will spend 28 months in federal prison for violating the FHA, which makes it illegal to threaten a person’s housing rights based on race, the Justice Department announced.

Gurkins, who was charged with one count of criminal interference with the Fair Housing Act in July, pleaded guilty on Aug. 6, 2020, to driving to a Black woman’s Greenville, North Carolina, home and yelling racial slurs at her and her four children. He also admitted that he told the family they didn’t belong in the home and brandished a metal rod and threatened to shoot them.

The Proud Boys were at it again. And once again they were met with courageous protesters. They must know they won’t win. Their days, like Trump, are numbered: