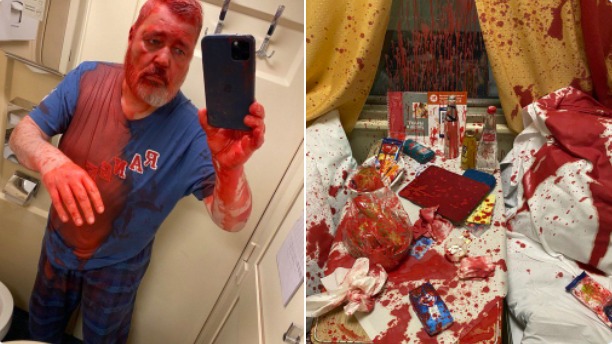 If you criticize Putin in Russia your life is at risk:

Dmitry Muratov, the editor-in-chief of the independent Russian newspaper Novaya Gazeta, who won a Nobel Peace Prize in 2021 for publishing pieces critical of the Russian Government and President Vladimir Putin, was attacked during a train trip on Thursday.

Muratov shared photos of the aftermath of the attack on Telegram. The attacker, who remains unknown, coated Muratov and his entire private train cabin with red paint. The paint had acetone in it, and Muratov wrote along with the picture “My eyes burned terribly.”

The journalist’s attacker apparently shouted, “Muratov, here’s to you for our boys,” which likely sounds like a pro-war phrase where “our boys” are Russian soldiers, as Novaya Gazeta had been publishing pieces critical of the Russian invasion of Ukraine. However, this independent outlet had already temporarily shuttered before the attack.